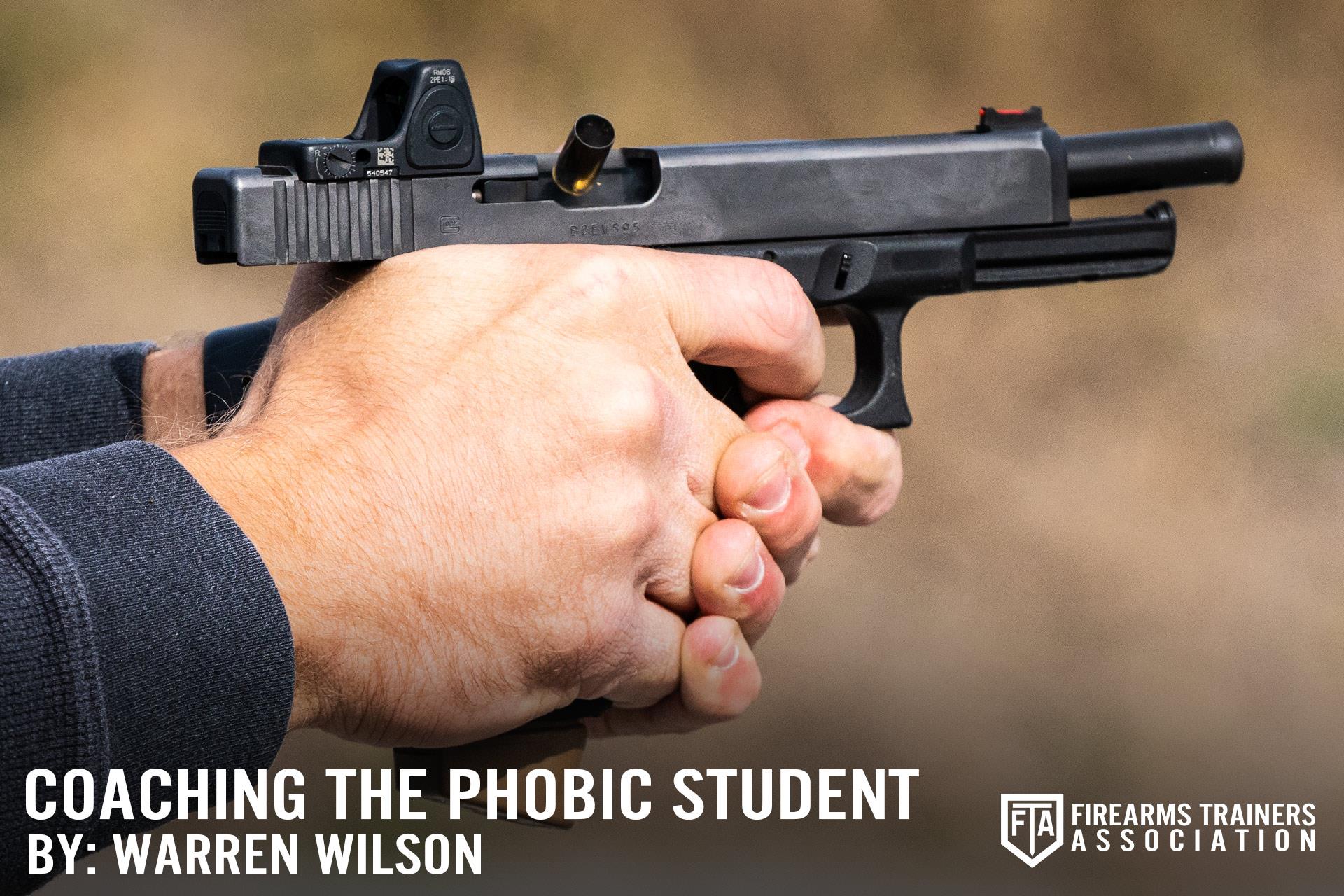 Posted on March 2, 2021 by Warren Wilson in Training

“I’m afraid.” It’s rare for a firearms instructor to hear those words from a student.  Still, it’s common for people to have a phobia of firearms. This particular lady was different from my previous phobic students in that she had no compunction about admitting it.  She just wanted to conquer her fear.  I wanted to help.  Unfortunately, I wasn’t as prepared to help her as I should have been.

After the classroom portion, but before we took the first live-fire shot on the square range, I asked if anyone was still having comfort issues. She again said, “I’m afraid,” in no uncertain terms. She was afraid to take that first shot, but she certainly wasn’t afraid to get her money’s worth out of her instructor.  It made me think about all of those people out there who may not have that extra ounce of courage it takes to verbalize their fear. It really made me think about all of those good folks out there who never come to a shooting class of any kind because of that fear.

Over the last several years, I’ve developed a series of three basic handgun classes simply named, “Level 1,” “Level 2,” and “Level 3.”  We never schedule more than two of them per day so the student must come to the range at least twice to complete the program.  We encourage attendance by providing an eight-hour basic handgun certificate to anyone who attends all three classes.  We keep the blocks affordable ($35 for three hours) so students can come back to the same class several times.  Spaced repetition is not only effective for rote learning but it also enhances comfort level and that’s what we’re striving for with these students.

I shamelessly stole an innovative technique from noted firearms instructor Tatiana Whitlock.  She wrote about teaching a ladies-only AR-15 class.  Toward the beginning of the class, she guided her students through assembling their rifles.  In doing so, she gave them power over the machine while simultaneously showing them that the rifle is just a tool and they are the craftsman.  I don’t remember her exact words but that was my take on this brilliant strategy.  As any good instructor should, I immediately co-opted this idea and started using it in my pistol classes.  Instead of using inert training pistols for my phobic students to practice their grip and trigger finger discipline, I field strip their pistols and have them use the frame during these exercises.  (One note of caution:  ask your student’s permission before doing this.  You are trying to empower your student. They must be involved in the decisions.)  I always start with just the frame.  Then somewhere during the class, I’ll place another piece of the pistol, one at a time, placing it in front of them.  It’s imperative you read their reactions as you are doing so and ask permission each time while not making a spectacle in front of the other students.

When I suspect there is a phobic student in class, I’ll ask the students to guess my greatest personal phobia. They are always surprised when I tell them it’s public speaking.  Invariably, one of the attendees responds by trying to provide me with encouragement saying something like, “well, you’re good at it now.” That drives home an unspoken point: The other students want to see each other do well.  There is almost nothing people fear more than being embarrassed in front of a group of strangers.  Displaying your own vulnerability is a great way to start building the trust you will need with your student to overcome their fear.  On that note:  Avoid using the word, “fear,” in class.  Use more innocuous words like, “trepidation” or “hesitation.”

There is something else we can do for our students before we actually shoot.  A lot of non-shooters have no idea how firearms actually function and ignorance begets fear. We use inert training guns in the classroom and have each student hold the dummy gun with a good grip and trigger finger placement during the lecture.  After we cover the fundamentals, I have each student come up individually and I actually push back on the “muzzle’ of the training aid to show them how little the gun will actually affect them physically.  I learned this teaching technique from one of my many instructor mentors, Jerry Jones of Op Spec Training. This exercise gives the student a chance to perfect their fundamentals and also let them begin to overcome their fear of recoil before they experience it.

On a related note, a lot of trepidation (see?) comes from muzzle blast.
Muzzle blast is the primary cause of “flinching” in the novice shooter which is, of course, detrimental to proper follow through. I encourage students to use both ear plugs and muffs. That simple combination seems to make a great difference for the new shooter. Of course, that means the instructor must work a little harder to make certain that range instructions are heard and understood.  I keep a few sets of electronic hearing protection in my kit for these occasions.  Speaking of equipment needs:  Ensure your folks have brimmed hats to keep brass from landing and resting on their eye protection causing a burn.  Also, ensure your students aren’t wearing shirts that would allow hot brass down their collar.  Imagine what that experience would do to someone who was already hesitant about shooting.  It’s a good idea to keep a few extra ballcaps and shemags in your teaching kit.

I always shoot a few rounds when we first hit the range just to add some live-fire visual and audible inoculation.  It’s also important for the students to see the brass ejection pattern.  I failed to do this early on in my teaching career and a phobic student was hit by her neighbor’s brass.  She thought she’d been shot and we had to start all over again with her.  That was a failure on my part that I’ll never forget.  After the demo, students shoot one round a piece, one at a time with no one else on the line but me until everyone displays a reasonable level of comfort.  If that goes well, we have everyone in a relay stand on the line while they shoot one at a time.  Usually, by the end of the third class, everyone is firing five rounds together at the same time with a bit of swagger.  I never fail to make that observation out loud and express my pride in their accomplishment.

Back to our phobic heroine from the beginning of this article:  This particular lady’s fear faded quickly and, toward the end of our shooting session, had landed squarely in her comfort zone. I was literally chasing her from the loading station to the firing line between relays.  Her fear ceded to her excitement:  Excitement that she had taken control.  Excitement that she’d overcome a challenge.  Unfortunately, I did not emphasize how important it is to keep engaging that fear; to keep going to the range. She eventually became afraid of her firearm again.  Inoculations sometimes need boosters to maintain their effectiveness. That is another mistake I’ll never make again.

One of my favorite quotes is from Marie Curie.  “Nothing in life is to be feared.  It is only to be understood.  Now is the time to understand so that we may fear less.”   If you know her story, you understand the profoundness of that statement.  Our job as firearms instructors is to facilitate understanding.  It’s amazing what people are capable of accomplishing when someone just shows them that they can.  As I mentioned in the first paragraph, students will rarely verbalize their fear.  But, they will ‘tell’ you in other ways.  If you are firearms instructor, you will get the occasional phobic student.  If you fail, you cannot un-ring that bell.  What you can do is be prepared to facilitate understanding and help someone conquer their fear.