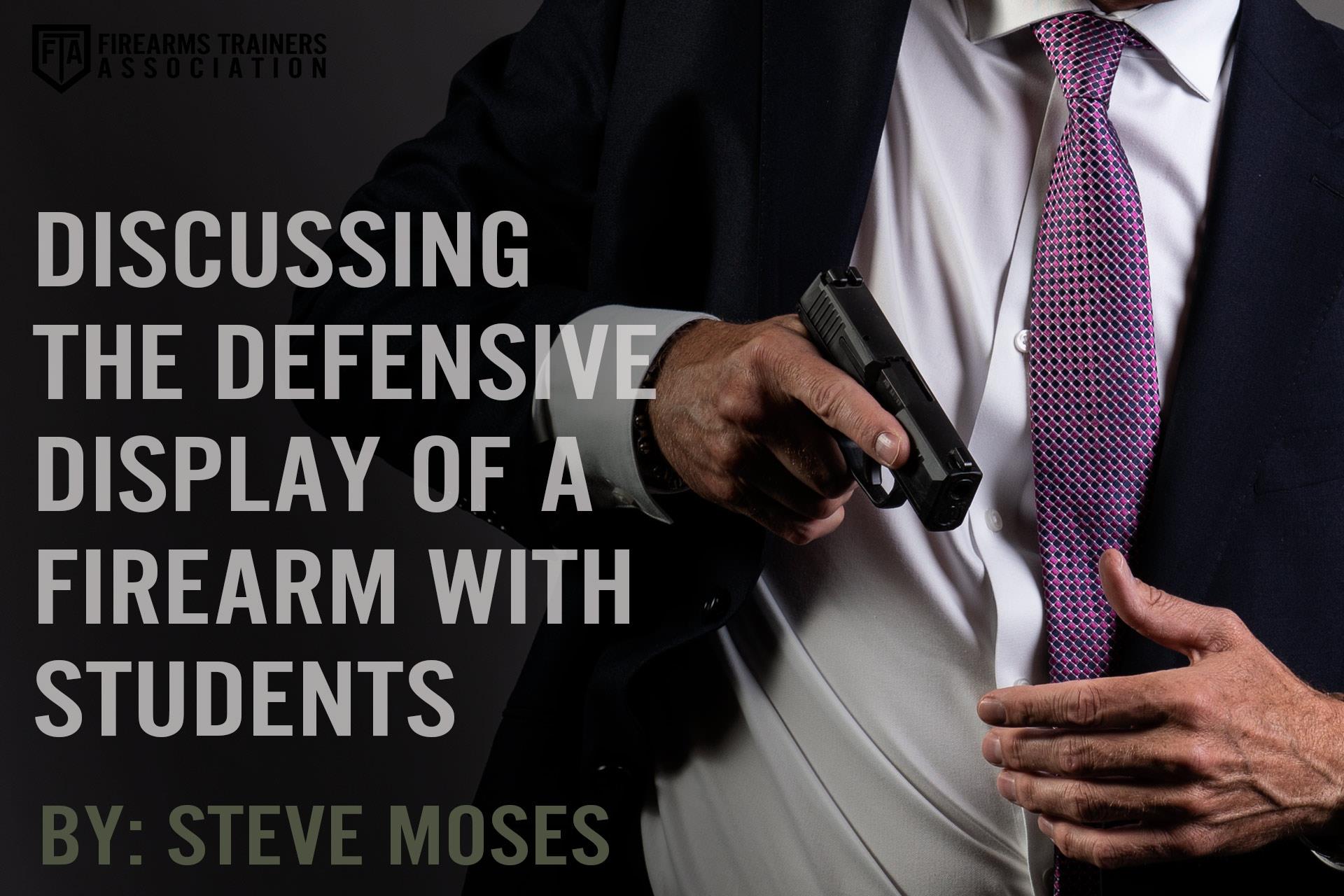 Posted on December 22, 2020 by Steve Moses in Training

Discussing The Defensive Display Of A Firearm With Students

DISCUSSING THE DEFENSIVE DISPLAY OF A FIREARM WITH STUDENTS

Kyle Sweet is both an owner of and General Counsel for CCW Safe. As an attorney he has defended many of the largest insurance companies and health systems in the United States in catastrophic injury cases. Kyle has won national Attorney of the Year on two occasions for two of the largest systems in the area. He also defends Police Officers in Use of Force cases, in-custody deaths, and allegations of police brutality, and is part of the CCW Safe Critical Response System to law enforcement agencies in Officer Involved Shootings throughout the region. What most people do not know is that Kyle is also a former Enid, Oklahoma police officer. I was recently talking to Kyle about the using the defensive display of a firearm as a use of force in certain self-defense scenarios and he responded as follows:

“CCW Safe’s number one hands down, not even close, most common incident/claim is a criminal charge of brandishing.  I think a lot of focus must be on WHEN you draw your weapon. That is the decision that is most often judged by a District Attorney to be criminally liable. It typically happens when concealed carriers are in a confrontation and are angry and allow their emotions to overcome them. Lifting up your shirt and pointing towards a gun to show you are armed to someone who is not armed is an assault. The quandary that people find themselves in is this: The only way to justify the brandishing of a weapon is when you are in fear for your life. So, lifting up your shirt to show you are armed must be judged by the same standard as if you drew your weapon and fired.  So, if you are really in fear for your life…..why did you just display your gun? It is a real pickle. If your motivation is to scare the person into backing down, then you are essentially admitting the element of intent within Assault which can be defined as putting someone else in credible fear of being attacked. If you have a gun and the other person does not then their fear is credible.”

There are numerous instances in which a concealed carrier who threatened to draw or drew their handgun but did not shoot was charged with (and often convicted of) either a misdemeanor brandishing offense or an aggravated assault felony offense. There is a difference between being angry or simply intimidated by another person and legitimately in fear for one’s life and unable to withdraw. However, if the ambiguity of the situation is such that a concealed carrier waits too long to take action, he or she may be seriously injured or killed because they did not act quickly enough. Some concealed carriers believe that once they draw their handgun then they need to actually shoot it at another person and claim self-defense regardless of that person’s initial reaction to first seeing the weapon. The problem lies in the fact that there are numerous instances in which concealed carriers did exactly that and were subsequently charged with and often convicted of felonies that ranged from manslaughter to first-degree murder.

“So, as an instructor, a LOT more time should be spent on discussing these types of scenarios and the legal consequences that flow from them. Also, the Civilian Use of Force Continuum that Mike Darter did a while back for CCW Safe can be revisited over and over and really benefit people. It is different than the one we had as law enforcement officers, because we as private citizens are not needing to exert physical control over the other person. This is not the same as the law enforcement officer-related use of force continuum where you should always be one level of force above the other person. It is just not so with civilians.”

The legal standard for using non-deadly force is that the defendant must prove that it was necessary in order to defend him or herself from the imminent unlawful use of force by another person. Instructors and students need to know that the laws covering the defensive display of a firearm vary from state to state and proceed with extreme caution.

I personally believe that if the other party or parties are displaying the imminent intent to cause serious bodily injury or death, possess both the ability and opportunity to cause serious bodily injury or death, and there are no other reasonable options  available and that if there is sufficient time and distance for the concealed carrier to present the weapon without pointing it directly at the threat and issue strong verbal commands in order to stop an imminent deadly threat,  then that is the preferred response.

A defensive display of a firearm under these circumstances may demonstrate to another person or persons that I am both capable of and willing to use all necessary force in order to defend myself if required. The circumstances that I am referring to would be an encounter in which the other party or parties are displaying the imminent intent to cause serious bodily injury or death, possess both the ability and opportunity to cause serious bodily injury or death, there are no other reasonable options  available, and there is sufficient time and distance to present the weapon without pointing it directly at the threat and issue strong verbal commands in an attempt to stop an imminent deadly threat from actually taking place.

I ran this article by litigation consultant Shawn Vincent, and his response to me was:

“Reading this again, this point became a little clearer to me. Defensive display, especially where it is not considered deadly force, MAY be justified when there is ability and intent, but the opportunity has not necessarily crossed the “imminent” threshold. This is a subjective consideration; it’s not a legal standard, and there is still significant legal risk when displaying a firearm, but if you can safely end a confrontation without firing your weapon, it’s better than if you pull the trigger”.

As always, the ultimate intent of my articles is to shed some light on a subject that I think may be or should be of interest to fellow instructors, if nothing more than to remind all of us that many of our students have given little to no thought as to all of the negative consequences that might follow a momentary lapse of judgement.