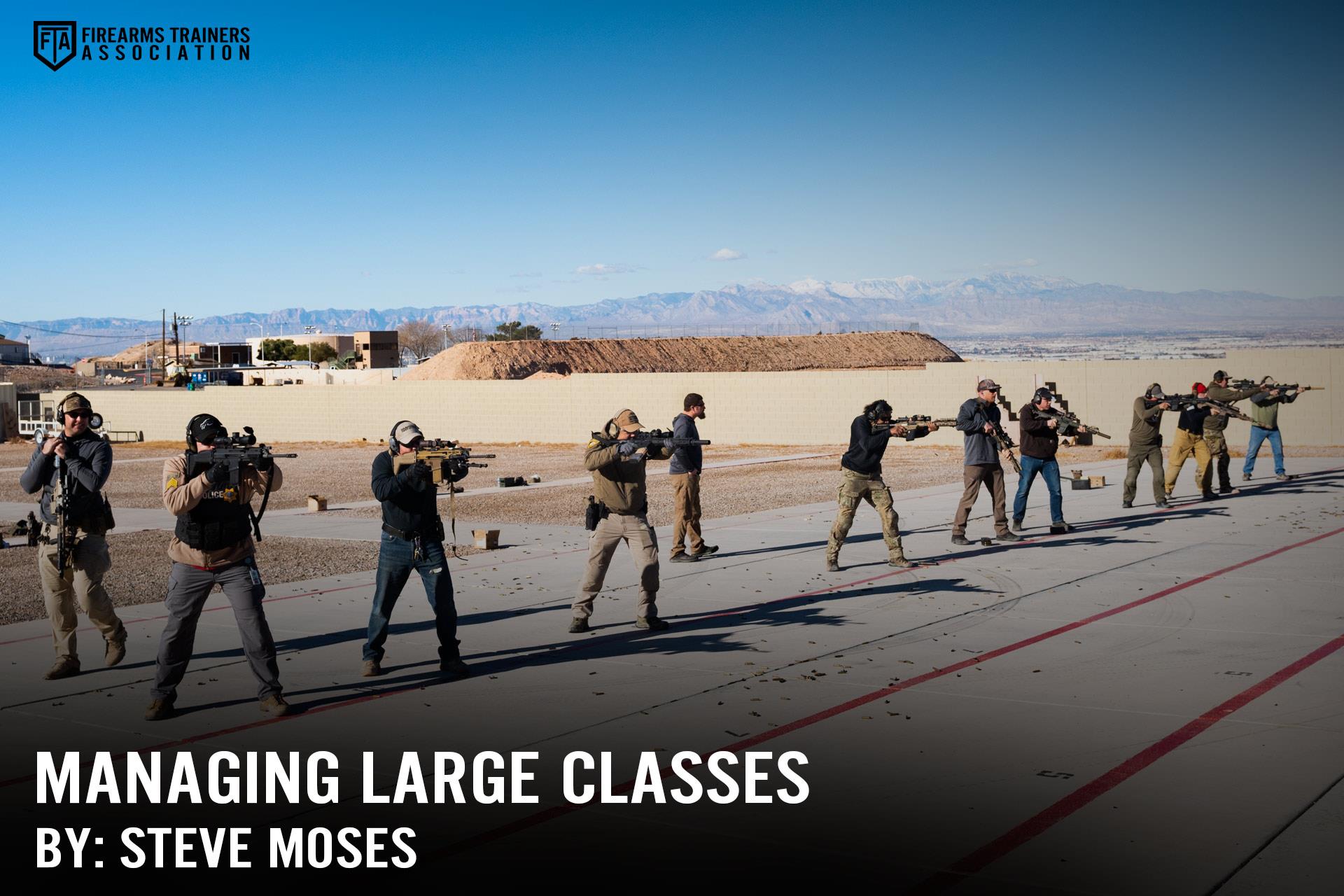 I typically limit our class sizes to 16, and that is only when I have at least one other co-instructor or assistant instructor with me. The largest class that I ever taught was a private class for a church that had over 30 students in the range portion when we were expecting about 12.

Safety concerns for students and instructors should always be the highest priority in any class. This is never truer than when it comes to large classes. Nothing should happen on the range the entire day without the instructors’ knowledge. The larger the class the greater the possibility that something may occur when an instructor or safety officer is not looking or not in a position to move in and intervene quickly enough. If safety or learning must be compromised because money is the main driver, the money is absolutely not worth it if someone gets injured or the students do not learn what they paid to learn. However, it is possible to conduct a large class without unnecessary safety risks and still teach all of the material in a quality manner normally done in a smaller class.

Vetting the students prior to class is important. Consider the nature of the class being taught and the expected level of experience required of the students prior to attending. Students attending an intermediate or advanced handgun class should have successfully completed a basic class first. Students lacking basic skills have no place in a more advanced course and sometimes inadvertently cause a disruption that affects the rest of the class. Instructors should be aware by now that on occasion students will misrepresent their prior experience.

If a student is hopelessly floundering at the beginning of class, they should be removed from the class in accordance with the instructor’s class policy. Instructors who do not have such a policy in place should give some thought to developing one before the next class and consider making the terms of this policy known to the class at time of enrollment.  One of the many reasons to have co-instructors and assistant instructors in even small classes is that it may be advantageous to remove struggling students from the main firing line and send them to another part of the range where an instructor can work with them for a while on a personal basis. Many students who struggle at first are often doing quite well by the end of class.

We divide any class that has more than six students into two relays for the live fire exercises. This accomplishes multiple things. First, it allows each instructor to focus on a more manageable number of students, which permits more hands-on coaching and makes it easier to watch for safety violations. Second, it affords the off-line relay an opportunity to reload magazines. Third, the off-line relay can be instructed to watch the shooter in front of him or her for safety violations.

Set out below are some other things that we have found that contribute to making a large class go more smoothly:

– Complete as much of the registration process as possible prior to the actual class date.

– Have students show up no less than 30 minutes prior to actual start of class.

– Meet the students upon arrival and take them to their assigned workstation where they can place their range bag along with any other equipment. Not only can this save time but it makes it safer for everyone. This is especially so in the more basic classes.

– Upon dropping their equipment off at their workstation, have the students execute waivers and pick up any related class materials such as the FTA Safety Poster. I am a huge advocate of making sure each and every student receives a copy of that safety poster before going out on the range.

– Start class promptly at the assigned class time. Assign an instructor to deal with any students that arrive late and minimize any disruption that might result.

– End the opening lecture with a medical brief and explanation of the firearm safety rules.  Either allow time for the students to don holsters, mag pouches, and handguns prior to moving to the firing line or instruct the students in advance to be prepared as soon as they arrive. Expect some new shooters to have little idea on how to gear up properly.  It is a good idea in my opinion to keep a few “one-size fits all” belts on hand. The Velcro liner belt worn under police duty belts are quite handy for this purpose. We typically assign two instructors or safety officers to watch over the students during this time period and assist as necessary and watch for safety infractions.  Students whose handguns are in cases or bags should carefully remove the handguns and insert them in their holsters under the close supervision of the instructors.  This is a dangerous time as there is a reasonable possibility that some of the handguns may be loaded, and more than likely some of the students just heard the firearm safety rules for the first time.

– The importance of a written lesson plan cannot be over-emphasized. Our lesson plans set out the times a specific block of instruction should start and when it should end. That way, we know if we are getting behind, which means we either need to get back on track or we are going to have to catch up later. Under no circumstances do we not cover anything in our lesson plan, but there are typically other opportunities to catch up later in the day that can be exploited.

– Proper positioning of the lead instructor and supporting instructors or range officers is important. Ideally, there are two safety officer or co-instructors each watching one-half of the line and no more than two to three steps away from any student falling into their assigned area of responsibility.

– We are big fans of the “dugout reload”, a term used at the Texas Pistol Academy to describe removing the magazine from the handgun while it is still in the holster and replacing with a fully loaded magazine.  This is a purely administrative reload designed to permit students to reload all of their magazines behind an occupied firing line without having to remove the handgun from the holster. Much time can be saved by merely having the students stuff loose rounds in their pants pockets and recharging their magazines while standing behind the other relay.

– Our classes have little downtime, so it is important to allow the students enough time to hydrate and use the restroom. Instructors need to remember that restroom facilities on many ranges might have only one Porta-Potti. In a large class, it may take a while to cycle the students through a restroom break, especially if there are multiple females.  To that end, allowing one relay to take such a break at a time is a good idea, as well as announcing breaks anytime the instructors need to replace targets or otherwise take all students off the firing line in order to do something to the range.

– At least one instructor or safety officer needs to watch the students during breaks anytime they remain at the range. It is not unheard of for a student to draw their handgun in the break area in order to do maintenance, switch handguns, or even change holsters.

– If class is to resume at a certain time after a break or lunch, then it should be resumed at that time. The chances that someone will straggle in late increases in larger classes, and we are doing those who complied with our instructions a disservice by waiting on them.

By no means do we have all the answers to managing large classes, but I know it can be done, and I have seen it done by other skilled instructors. Tom Givens does it routinely, and every one of his classes that I have attended over a twenty-plus year period was as smoothly ran as a major Broadway play.