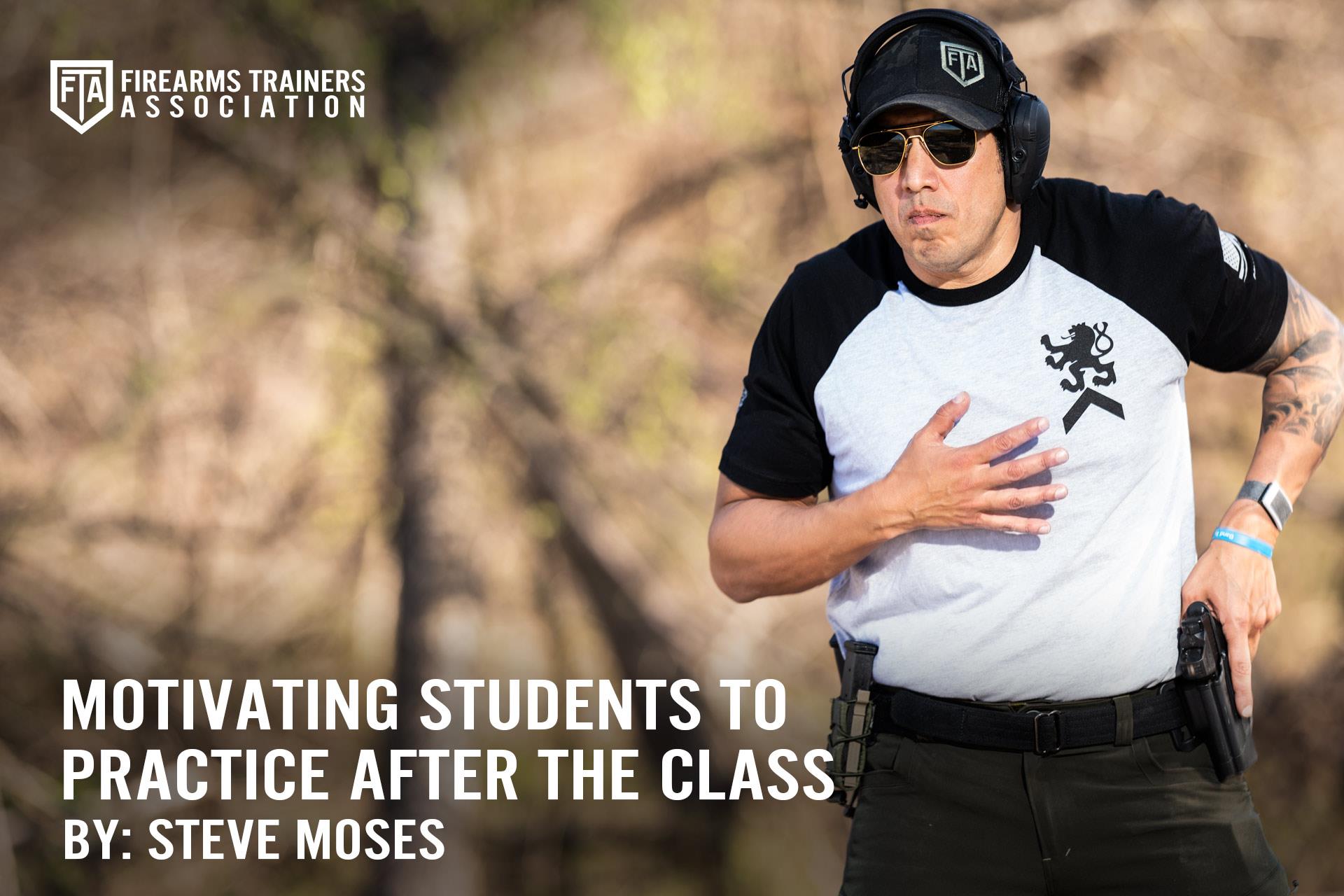 Motivating Students To Practice After The Class

I enjoy teaching defensive firearm classes. I do not measure success based only on whether the class was full, my students were happy, or that they were able to successfully pass some agency or state-required test. My objective is also to make sure that our students leave the range far better prepared to protect themselves and their loved ones for the rest of their lives than they were when they arrived.

It really doesn’t matter if the defensive firearms class that we just taught was a four-hour clinic or a forty-hour immersion class, our students will not get enough repetitions performing any individual skill so that it becomes subconsciously ingrained. Forgive me if the verbiage that I am using is technically incorrect, but most people must perform a specific skill a significant number of times (hundreds or thousands) until they can perform it on demand without consciously concentrating on the physical actions necessary to successfully accomplish it.  When I first learned to drive a vehicle (it was an old farm truck with a manual transmission) I had to concentrate hard on working the clutch, brake, accelerator, and stick shift. After doing it over and over, I was eventually able to do it both smoothly and quickly without conscious thought. The same is true for students who are unskilled, in need of new skills, or wish to improve existing skills.

I recently took an outstanding Red Dot Pistol Fundamentals and Performance Instructor course from Scott Jedlinski. Scott is an outstanding instructor and I strongly recommend him to even firearm trainers who only run iron-sighted pistols. In order for the shooter to consistently get the red dot quickly and consistently aligned with the target, an efficient and economical draw stroke that eliminates unnecessary movement and uses a high support hand grip with substantial hand pressure from the little fingers is required. The bonus is that the same draw stroke actually speeds up the draw to shot time with an iron-sighted pistol.

I left class with the knowledge of how to perform the revised draw stroke but without the ability to perform it on demand correctly and unable to do it without concentrating on all of the mechanics.  This is very much the state that students are in when they leave our classes. In less than three months that same draw stroke was fullly ingrained and when I shoot drills I know that once again I can concentrate fully on executing the drill correctly without directing any conscious thought to gripping, drawing, and shooting my handgun.

I achieved this largely by performing dry-fire practice three to five days a week and shooting fifty rounds a week (or every two weeks on a few occasions) in order to confirm that I was doing my dry-fire practice correct. My average dry-fire session was usually under ten minutes, and typically limited to about twenty-five repetitions. I used a B-8 repair target in my garage (backed by a bullet-resistant  wall) and varied my distances from three to seven yards. I would typically perform five repetitions free-style from three and seven yards, five repetitions from the strong-hand position at five yards, and five repetitions from support position at five yards.  All repetitions were performed from concealment except support-hand, which were done from low ready. I concentrated on perfect form knowing that that my session would soon be over and resisted doing lengthy sessions for the simple reason that I wanted to avoid getting sloppy and ingraining imperfect form that would cause me problems later.

At this point I want to ensure readers that this article is not about me. The reason that I set out my practice protocol is to offer evidence that it is possible to learn and ingrain new skills in a relatively short time (three months) in short sessions (ten minutes) performing relatively few repetitions (twenty to twenty-five).  I believe that the secret was the frequency. I truly believe that frequent short duration practice sessions work better than long duration sessions, whether frequent or infrequent. The problem with long durations practice sessions is that most students soon become bored, their mind wanders, and techniques become sloppy. Sloppy technique is definitely something that we don’t want students to ingrain.

I have arrived at the above conclusion in part because I often see former firearm students fail to progress as they should, and from teaching Brazilian Jiu Jitsu to white belts and even some blue belts. I am now a firm believer of having my students perform drills with a focus on fewer repetitions while maintaining a high attention to detail and doing so on a frequent basis, and as a result make the same recommendation to students that attend our defensive firearm classes.

There are multiple roads to the same destination, and by no means am I suggesting to experienced teachers that they should do as I recommend in this article just because this is my preference. For those that might still be looking for ways in which to motivate their students to invest some future sweat equity in order to develop a reasonable level of skill manipulating a defensive handgun and ability to quickly make good hits at the distances most violent criminal assaults occur, there appears to be much to say for recommending a dry-fire and live-fire program that focuses on short duration, high-frequency practice sessions and then describing specific drills that the students can practice. Instructors may prefer to recommend drills different than what I have set out above, but one constant that I think should remain is that the quality of the repetition performed is more important than quantity.