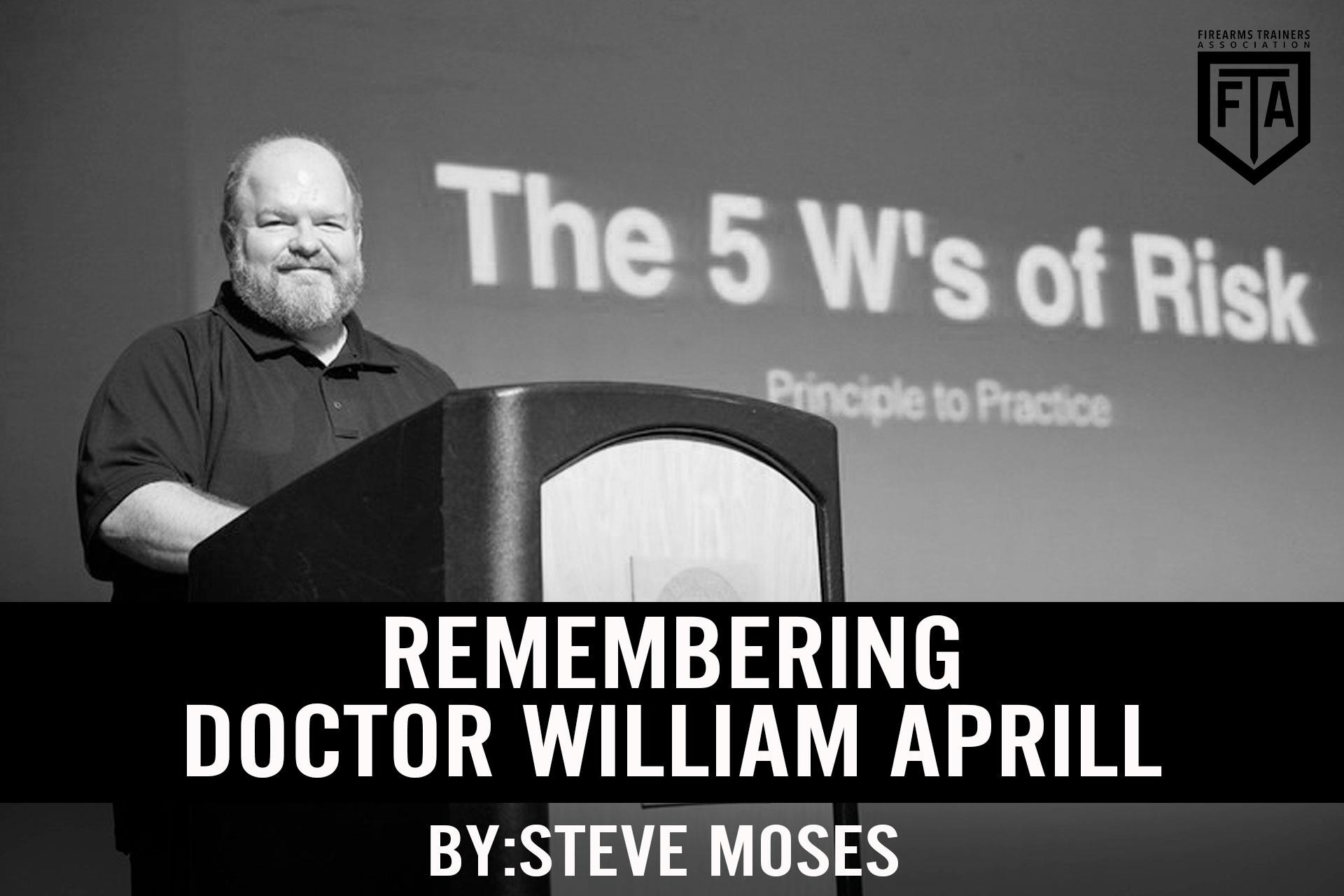 Posted on August 10, 2020 by Steve Moses in Jeff Gonzales

Doctor William Aprill died August 6, 2020. I knew William on a personal basis. He was brilliant, personable, and absolutely hilarious to be around, and I believe that during his lifetime he would have been successful at any endeavor that he may have attempted.  William’s career spanned from being a deputy sheriff and Special Deputy U.S. Marshal to decorated competitive shooter who conducted training for civilians, law enforcement, and military in various defensive fighting skills for three decades to being a practicing licensed mental health professional. He was an annual presenter at the Tactical Conference, and I have had the good fortune to attend a number of his presentations over the years.

Those who knew him know what I am talking about above, and those that do not unfortunately missed an opportunity to train under a trainer whose cumulative skills and knowledge made him one of a kind.  His take on Violent Actors and Violent Acts as well as his ability to educate concealed carriers on this subject was, in my opinion, second to none.

Set out below is an article that I wrote for CCW Safe that had not yet been published. I hope it accomplishes three things. First, that it provides information for concealed carriers that may prove to be of benefit if they come in contact with a potentially violent individual. Second, that it inspires concealed carriers to seek other articles and FACEBOOK posts written by William or students that had attended some of William’s classes. And third, as a gentle reminder to all of us that knew him and studied under him of what a gift it was to just know William for the person he was.

“IT IS NOT ENOUGH TO CARRY FIREARMS OR OTHER SAFETY/RESCUE EQUIPMENT WITHOUT A FULLY-FORMED MENTAL MAP OF THE EXPECTED TERRAIN”. This sentence and much of the material set out in this article was taken from a chapter William Aprill wrote in the book Straight Talk on Armed Self Defense that was titled “Violent Actors/Violent Acts: A Conceptual and Practical Overview”.

Many concealed carriers focus only on learning skills designed to enhance their physical performance in the event they are involved in an interaction with a violent criminal actor (“VCA”).  It would most likely be a good idea for concealed carriers to also familiarize themselves with those persons most likely to commit violent criminal attacks, since these are the individuals who would violate, injure, or murder others due to their inability to experience remorse, disregard for the perspectives of others, and lack of empathy. The VCA is distinguished from other criminal offenders because of their willingness to take violent actions against others and their preference for assault, robbery, rape, and murder over such crimes as simple theft or burglary.

Aprill claimed that while the numbers of murders per capita in the United States is lower than it was in the early 1990s, the same is not true for aggravated assaults. The facts are that many attempted murders become aggravated assaults simply because the victim did not die due to advances made in EMS services, rapid transports, pre-hospital trauma life support, and the current skills of trauma surgeons. Before people can say that aggravated assault rates are down, there are reports circulating that some violent acts that would have justified a charge of aggravated assault in the past have become more routine and instead are often charged as simple assault.

A general awareness of those individuals that might present a risk of violence to concealed carriers was advised. Concealed carriers should understand that not everyone that looks dangerous is dangerous, and that not everyone that does not look dangerous is not dangerous.  Statistically, the “average” VCA is male, young (majority between the ages of 18 and 35), and often normal in appearance.  Concealed carriers should avoid the danger of assuming that another person fitting the description above is indeed a likely VCA based upon gender, race, or ethnicity.

Although the concealed carrier cannot know the exact background of every VCA that he or she might encounter, they can assume that this background is likely to include one or more of the following factors:

Influences on the VCA may include living in neighborhoods featuring poverty, high rates of crime, fewer intact nuclear families, frequent transitional movement, a lack of social cohesion, and rampant substance use and abuse. The behavior of children in some families is often not monitored nor corrective discipline furnished in order to enable the children to function better outside of the homes. Further influences on children includes the presence of peers and older family members with criminal histories who may demonstrate the effectiveness of achieving their objectives by using force against others. Other influences may be evolutionary genetics, the influence of television, movies, and video streaming multiple depictions of violence, chemical dysfunction within the brain, and prior traumatic brain injury.

Violence performed by the VCA to others does not cause discomfort, but instead may be perceived as rewarding. Aprill suggested that most VCAs likely have what is called Antisocial Personality Disorder (“APD”). Aprill described APD as “a long-standing pattern of maladaptive interaction with the world that affects feeling, thinking (notably perception and attributions), and behavior, causing significant impairment of distress…the hall mark symptoms of APD are disregard for and violation of the rights of others, callous disregard and lack of empathy, and the inability to experience remorse or take others’ perspective. In practice, APD subjects will act impulsively and aggressively, lie, cheat, steal, manipulate, and mistreat others without compunction resulting in failure in responsibilities and relationships, frequent conflict with others, criminal justice system involvement, and violence”.

Why does this knowledge matter to concealed carriers? Because VCAs do not think like them. It would most likely benefit the concealed carrier to understand that there are simply people out there who would harm or kill them for no other reason than that is the way the VCA was “hard-wired”. In other words, concealed carriers should not be taken by surprise in an attempt by others to injure or kill them.

Aprill suggested that concealed carriers might be best served by diligently undertaking the following actions:

Rest in peace, William. We are diminished.