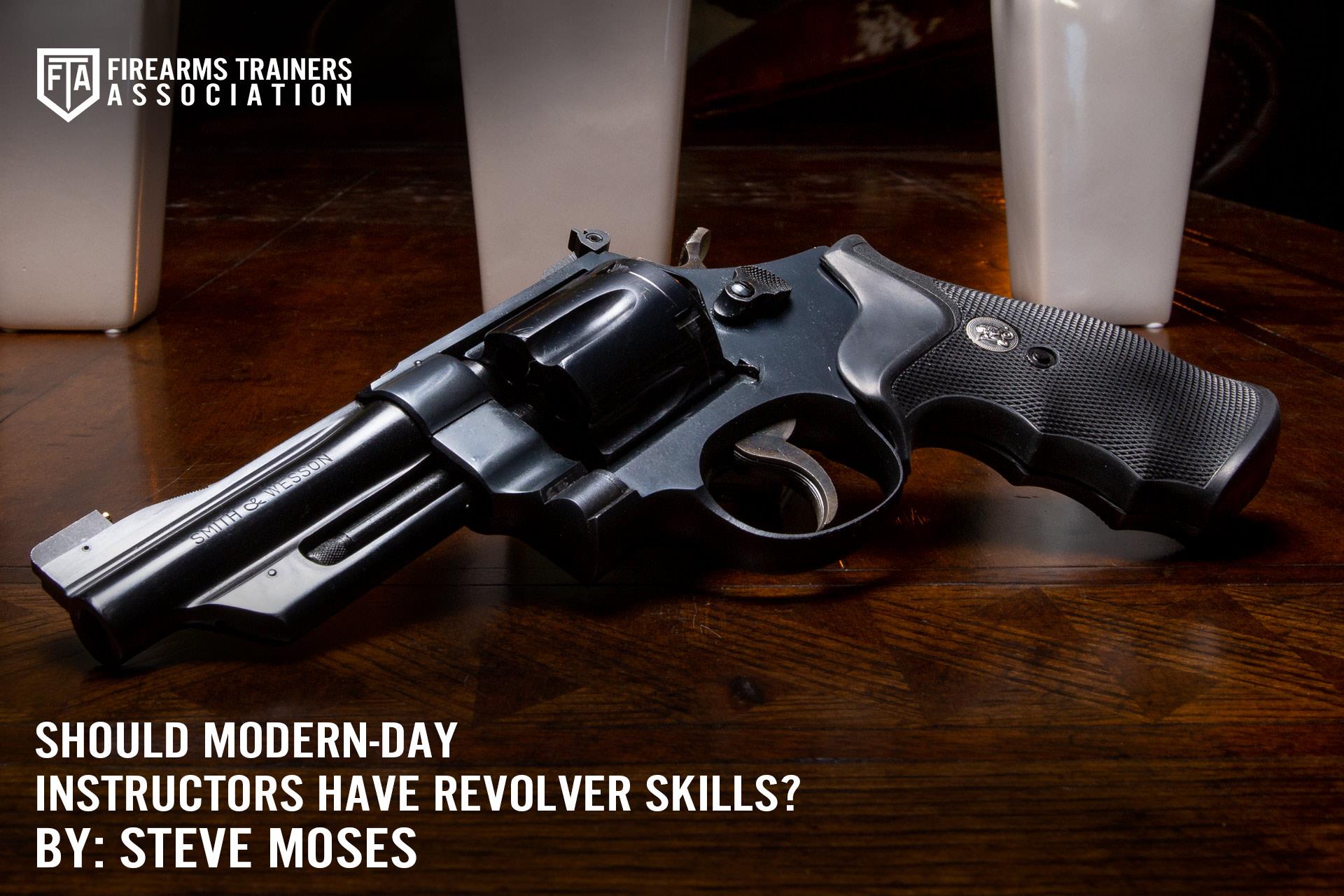 Should Modern-Day Instructors Have Revolver Skills?

SHOULD MODERN-DAY INSTRUCTORS HAVE REVOLVER SKILLS?

It should probably come as no surprise that I do not wish to get in a gunfight. If I had no choice, I would want to use a properly set-up AR-15 or shotgun. If I were unable to use a long gun, I would want a properly set-up Glock 19 or Glock 17 (or their equivalents). My third choice if I were not able to use either a long gun or semi-automatic pistol would be a revolver.

The reason that the revolver does not score higher is that it holds less ammunition, is slower to reload, and is typically harder to shoot well than many modern semi-automatic handguns similar in size.  All of these reasons might suggest that the proper response to the question of whether modern-day instructors should have revolver skills might be a resounding “no.” However, there are several compelling reasons that might make instructors want to reconsider.

Some students prefer to use revolvers. These are typically students who are somewhat obsessed by revolvers, students who are better off with revolvers because they lack the hand strength to cycle a slide, and students who simply have trouble comprehending the mechanics of operating a semi-automatic pistol. As an instructor, I have had all three in my classes. I have received advice from other instructors who say that instructors owe it to their students to convince them that their choice of a revolver as a primary self-defense handgun is ill-advised, or that there are now pistols such as the S&W Shield EZ that require less grip strength to cycle the slide, or that the student owes it to him or herself just to continue practicing until such time they can competently operate a semi-automatic pistol. The big problem with this advice is that a large percentage of students will not or cannot take it. My preference is to make recommendations, and if the student still wants to use a revolver and if it functions properly and is shootable then that is what we will train with. In order to do a good job as an instructor I need to know how to teach students to get the maximum out of that revolver.

Despite the old saying of “six for sure”, service revolvers are mechanically more complex and probably more fragile than service autoloaders. They are less likely to survive abuse and can experience malfunctions that require time and perhaps tools to fix. Revolvers really benefit by being cleaned after every shooting session, and perhaps even during high-round count sessions or classes. Some students replace factory springs with aftermarket lower weight springs and perform trigger jobs in order to lighten the trigger pull and then discover that their revolver will no longer ignite the primers in their cartridges. Instructors should be aware that this can happen and prepared to accurately diagnose revolver problems and know what needs to be done in order to correct them.

Instructors whose experience has been limited to 1911-style and striker-fired pistols may find the longer trigger pull of a revolver disconcerting. This is especially true when it comes to shooting lightweight small-frame revolvers. It may take a while to get comfortable with a good revolver trigger, but it is time well spent and an unexpected benefit is that might very well make us better shooters overall.

Revolvers are exceptionally good about tolerating benign neglect. Left loaded, there are no compressed springs to weaken. Unlike a semi-automatic pistol, the revolver does not rely on energy derived from a fired round to function properly. The user supplies the energy by pressing the trigger (or thumb cocking).  The revolver is not a bad choice for those of us that like to store a second handgun in a secured area if someday we may need to get our hands on a defensive firearm quickly.

Competent shooters will find a S&W Model 10 (.38 Special) or Model 19 (.357 Magnum) or variations thereof to be extremely shootable and still capable of being concealed. I used to own a Ruger GP-100 in .38 Special, and as I recall it too was easy to shoot and quite accurate. Robberies are sometimes committed by two or more persons, and it may very well be that that a six-shot revolver is what instructors call a “one-person defensive handgun,” meaning that it may take multiple rounds in order to stop just one person. I cannot imagine the horror that I would feel if I shot my revolver dry in the middle of a gunfight knowing that it would take valuable seconds in order to reload it and return to the right. In that case, the quickest reload might be to carry a backup .38 Special snub-nose revolver. I would not go so far as to say: “problem solved,” but I would say that in the hands of a trained shooter a quality medium-frame revolver can be a force to reckon with.

I started frequently carrying a S&W 442 Airweight .38 Special Revolver in 2019 after taking a Snubby Revolver class from full-time firearms instructor Hany Mahmoud. I think of it as the handgun to carry anytime I will not “need” a handgun. In other words, this is the handgun I carry in the house, out working in the yard or sitting on the porch, and when I go to the gym. I also frequently practice with it and have what I hope is a good understanding of both my capabilities and limitations if forced to use it.

In summary, there is no good reason that I can see for defensive firearm instructors to not be both competent with revolvers and able to provide quality instruction to students who have sought us out because they have decided to not willingly grant the power of life and death over them and their loved ones to others.  Sometimes it is easy to forget what responsibility we take on as defensive firearm instructors.