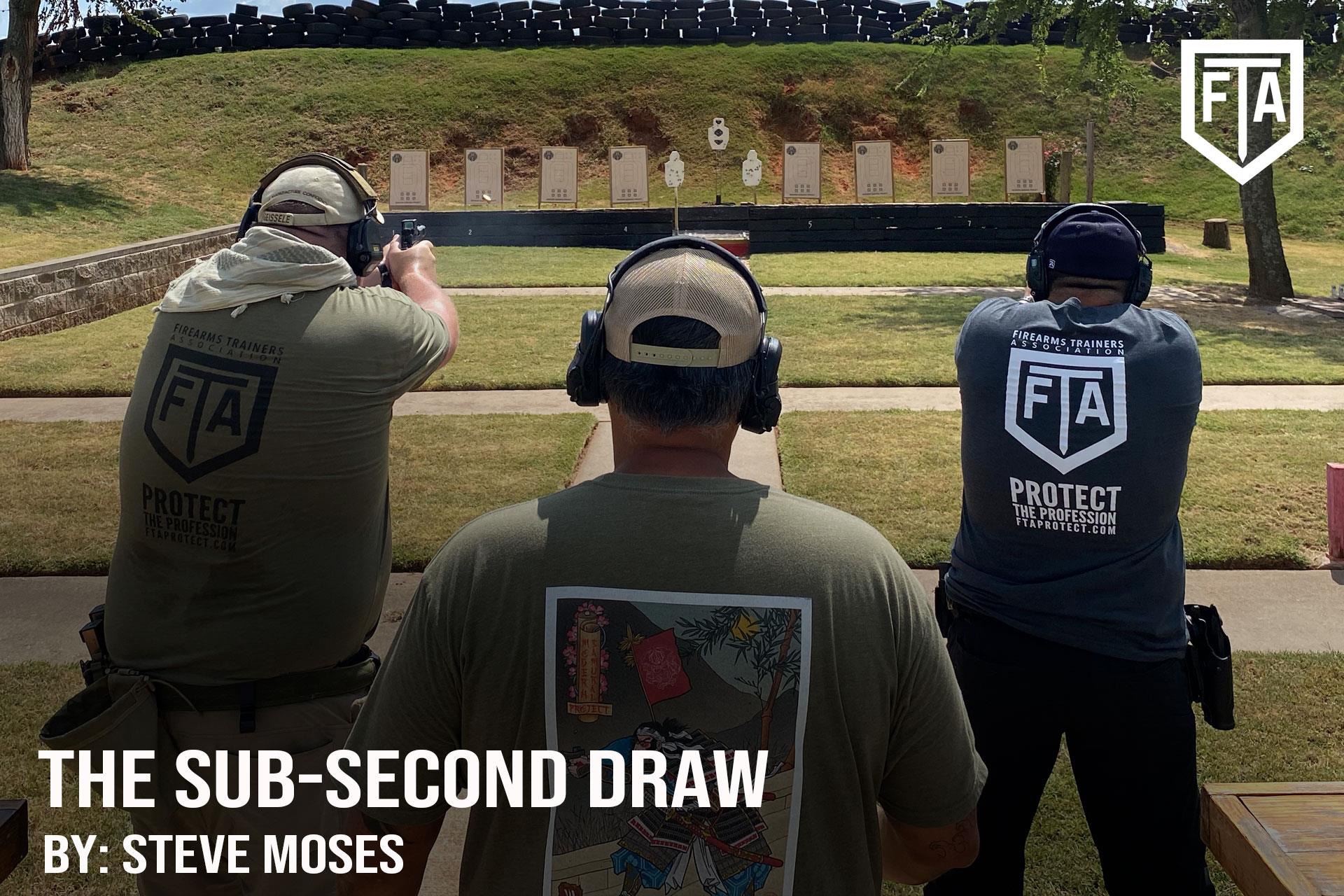 Posted on September 30, 2021 by Steve Moses in Training

In the last month or so the topic of the sub-second draw from concealment to shot in regard to effective self-defense has been the subject of podcasts by some respectable FTA members like Lee Weems, Bryan Eastridge, and Riley Bowman, with input provided by another FTA member, Spencer Keepers. It eventually became somewhat of a controversial internet topic with some animated back-and-forth conversations that included several snarky comments.

I prefer to view the sub-second draw through the lenses of a defensive firearms trainer whose objective is to better prepare his students to effectively defend themselves against others who might wish to seriously injure or kill them. I do not tell our students that a sub-second draw from concealment to shot is necessary to effectively defend themselves. I do not think that is the case (and I am unable to pull it off myself). I also think that as a trainer that the topic of sub-second draw is compelling because it takes more than fast-twitch muscles, quick reflexes, and pure eye-hand coordination to accomplish.

I took speed-shooting courses from FTA members Spencer Keepers and Scott Jedlinski and completely nerded out on the amount of attention they paid to the smallest of details. One second is an extremely short amount of time to respond to a stimulus, clear the cover garment, get an initial grip on the handgun, move the handgun to upper torso level, join the support hand properly using heavy pressure to multiple points on the handgun frame, drive the handgun to the target, take the slack out of the trigger while aligning the sights/dot with the desired point of impact, and press the trigger without causing the muzzle to move and achieve an acceptable hit. As an experiment, I worked one afternoon on sub-second draws and found that at three yards I can draw to a timer and make a hit on a 3 x 5” index card in about 1.10 seconds.

For me, that is close enough to a sub-second draw to make the observation that it would have been impossible for me to see, process, and respond to anything that that might take place from the time that the timer went off to bang. To quote Tom Givens, I am “outrunning my headlights” and there is no opportunity for me to spend any dwell time on target. I am convinced that if I decide to go as fast as I can I have absolutely committed myself to the shot about the time that my finger touches the trigger, and if the target moves I am likely to miss to some degree. Even worse, if the circumstances suddenly change and I am no longer justified in taking the shot I may not be able to respond quickly enough to abort. A split-second of dwell time may be all that I need to confirm that my muzzle is properly aligned with the desired point of impact, make any necessary sight realignment, or choose not to take the shot

Having said everything above, by attending the aforementioned speed-shooting classes I now have a fairly consistent 1.75 second draw from concealment to hit on a 3 x 5” index card at five yards. Can I shoot faster than that on a larger target? Yes, but I am striving to put that first round on a small yet critical area in order to immediately force another person to stop who at the same time is doing his or her best to kill me. All my dry-fire work is done on a 3 x 5” index card strategically placed over a Birchwood Casey 3D target. I chose this particular dry-fire target setup after attending FTA member John Hearne’s Tactical Anatomy/Cognitive Pistol class earlier this year. This was a great class in which I turned in an abysmal performance (“sun was always in my eyes, it was hot, instructor was mean, etc.”). Memory of recent failure has always been an excellent source of motivation for me from which I have historically benefited.

For me, the benefit of taking a pure speed-shooting class that places a substantial amount of interest on making extremely fast hits from concealment from an expert instructor like FTA members Spencer Keepers, Scott Jedlinski, Riley Bowman, Max Michel, JJ Racazza, and Brian Hill means that I can take everything that I have learned from a Who’s Who list of defensive firearms instructors and do a better job of teaching my students how to use a defensive handgun effectively. My recommendation to other FTA members who teach defensive firearms classes only and who may agree with me is to take at least one performance-based shooting course under an outstanding technical shooting instructor.