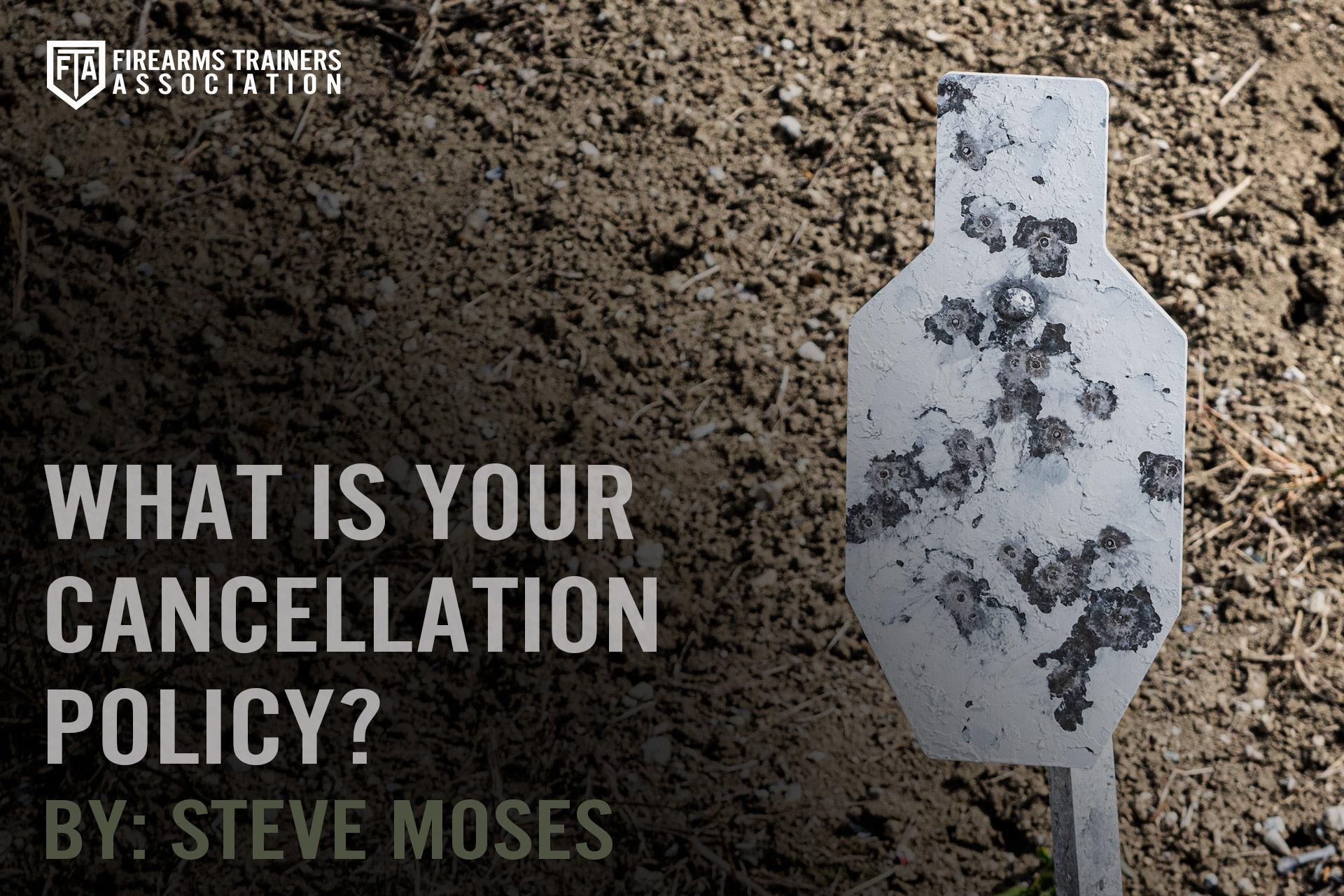 Posted on November 10, 2020 by Steve Moses in Training

Any firearms trainer who is also a writer that believes that he or she is a subject matter expert on virtually everything other trainers might actually find value in is in dire need of counseling, medication, or both. The following article is being written by someone who knows that their knowledge in this area is lacking.

I have been writing firearm and training articles for several decades, the majority of which were based upon prior training that I had taken, written material that other trainers had produced, interviews, or just old-fashioned research. I have also been teaching defensive firearm classes since 1994 and marketing my own classes since 1996. During that time, I have also been a student many times in classes taught by other trainers. As such, I have developed my own student cancellation policy and have seen the cancellation policies of many other instructors.

Why a win/win for both?  Naturally, trainers are financially affected if students who sign up for a class cancel at the last moment (which is especially annoying when it is for the most whimsical of reasons) or the class was completely full, a registered student falls out, and there is not enough time to put another student in that slot. On the other hand, a student who loses their entire fee if they are unable to attend due to no real fault of their own (illness, death in the family, or some other major event) will likely be left with a sour taste in their mouth. Other potential students will wait until the last moment to register in order to avoid risking this happening and are then disappointed to find out that the class was cancelled because others did the same thing.

There are two cancellation policies that I am familiar with. The first is a policy that payments are only refundable up to thirty (30) days prior to the date of the class. My experience has been that some trainers will allow students who are unable to attend to have someone else they know take their place. Others trainers I have known would make a public announcement on behalf of the student who is unable to attend that a slot has become available because a registered student was unable to attend, and if contacted that they will forward that student’s contact information to the interested party. Others will offer those slots to students who are on their waiting list, and if filled refund the payment to the student who was unable to attend.

Our policy is that all payments are non-refundable, but if a student is unable to attend and advises us prior to the day of the class that he or she is unable to attend that we will retain on their behalf for a period of one year from the date of the class credit towards any class that we teach in an amount equal to their payment. Since almost all of our classes are in either a four or eight-hour format and not nearly as costly as a lengthier class, students seem to have no reservations about enrolling knowing that they can bail if necessary and take the same class later (or any other class that we teach) without an additional cost expenditure. However, we limit all class sizes and if they want to attend a later class and notify us after that class is already full then they will have to wait for another class. We have been doing this for many years without student complaints. Prior to that during the pre-internet days, we required a 25% deposit prior to class with the balance payable at class time.

I think it is important to spell out the cancellation policy clearly on our website so that there is no confusion.  Based upon having spent over 40 years in the oil and gas industry with experience in running mineral interest title and negotiating and then reducing complex agreements to writing, I am a firm believer in wording that is clear and concise so that confusion is avoided, and if a disagreement arises that nothing in the policy was vague or contained what is commonly referred to as a “loophole.”

As stated before, I am no subject matter expert when it comes to cancellation policies, and I suspect that there are other sound methods of handling class cancellations. I am always interested in reader feedback. On more than one occasion I have written a follow-up article because a reader who was indeed a subject matter expert brought something to my attention. If nothing else, this article may resonate with a FTA member who may wish to give some thought to the question of “what is your cancellation policy?”