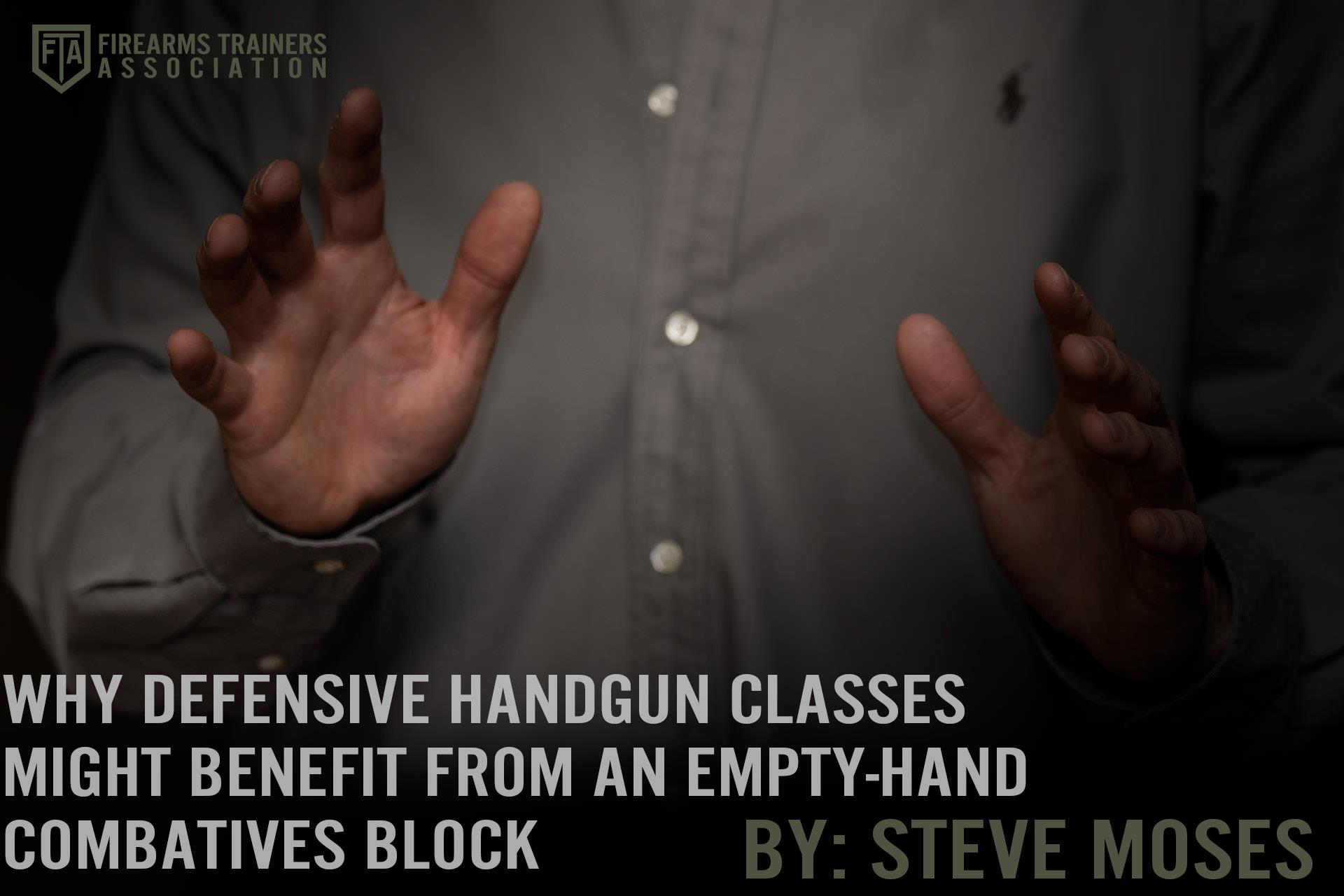 Posted on January 7, 2021 by Steve Moses in Training

Most of our students have at least some concept of using a handgun to defend themselves against a criminal brandishing a firearm, edged weapon, or blunt instrument like a baseball bat. This is not necessarily true when it comes to defending themselves against another using nothing more than fists and feet. In the majority of defensive handgun classes, the students do not leave the class prepared to defend themselves against a surprise attack from a distance of only two or three arms-lengths. I can only imagine how horrific it must be to suddenly realize that I am in mortal danger and unable to do anything about it, made worse by knowing that the person savagely attacking me might care less if I suffer irreparable brain damage or die. The flip side of this might be that I know that I do not want to pull a gun on this person who is now crowding me, but I definitely do not want to let him or her punch me in the face.

Most people do not realize that the chances are good that if a student is attacked, the weapons used against him or her will be fists and feet instead of a firearm. The manner in which hands and feet are used is not the same as the manner in which firearms are. The criminal offender must initiate the first strike from a distance of mere feet, which leaves the student with little time to see and process the action, much less to respond effectively.

In order to prevail during such an attack, the student needs to not get knocked out or knocked down. In all probability, the very best way to do this is to protect the brain, stay upright, and not absorb further serious damage long enough to get into a position that allows the student to over-power the attacker, break contact and run away, or get another defensive weapon into play such as pepper spray, a knife, or a concealed handgun. Students need to understand that just because another person struck them or attempted to strike them does not mean that they can automatically lawfully use deadly force. Deadly force is only warranted when the attacker has the imminent intent, opportunity, and ability to seriously injure or kill their intended victim, and it is entirely possible for an attacker to have the intent but lacks the ability or opportunity to inflict that kind of damage. One of the problems for our students is the difficulty in ascertaining intent, as many criminals can do a good job of masking it until they get an opportunity to initiate their attack more effectively.

The sole purpose of this article is to bring to the attention of other instructors that are making their students aware of the problems associated with dealing with an unarmed attacker and possibly consider teaching a block of instruction devoted to learning how to better handle such a scenario. I am an advocate of “crashing the line” using a non-diagnostic blocking technique that goes by various names, including “3-Point Cover” and “Default Cover.” I was first taught this technique by Craig Douglas, and studied it later under instructors like Cecil Burch, Jerry Wetzel, Cliff Byerly, and Larry Lindenman. When performed correctly, this method allows the student to protect the head and neck against an incoming strike from almost any angle, to get inside of the arc of a circular strike, and to apply forward pressure to the attacker in a manner that robs them of the space needed to land hard subsequent punches and strikes. The technique itself is simple and easy to teach, along with a few follow-up techniques designed to throw the attacker to the ground, disengage in order to flee or gain enough space to access and effectively use a defensive tool, or remain in the clinch and submit them using one of several Brazilian Jiu Jitsu techniques.

I would urge instructors who are not familiar with 3-Point Cover and are interested in teaching this technique start by researching Craig Douglas, Cecil Burch, and Jerry Wetzel. I know of other instructors (myself included) like Paul Sharp, Chris Fry, and Fletch Fuller that can teach this material, but the three I listed above have already put out some great content on this topic in the form of writings and/or videos. A good book that addresses this technique is Red Zone Prime: A Foundation for Personal Protection written by Jerry Wetzel that can be found on Amazon.com.

Students who may have thought that if they had a concealed handgun on their person then there would never be any reason that they might have to go hands-on with another person who is possibly bigger, stronger, and meaner than them may at first be dismayed to find out that this is not necessarily the case. Having said that, their attitude tends to improve significantly once they are aware that this might occur plus they have participated in training that better prepared them to successfully deal with another person of suspicious or even conspicuous intent who may launch a 0-60 assault from a distance that precludes them from drawing their concealed handgun in time.