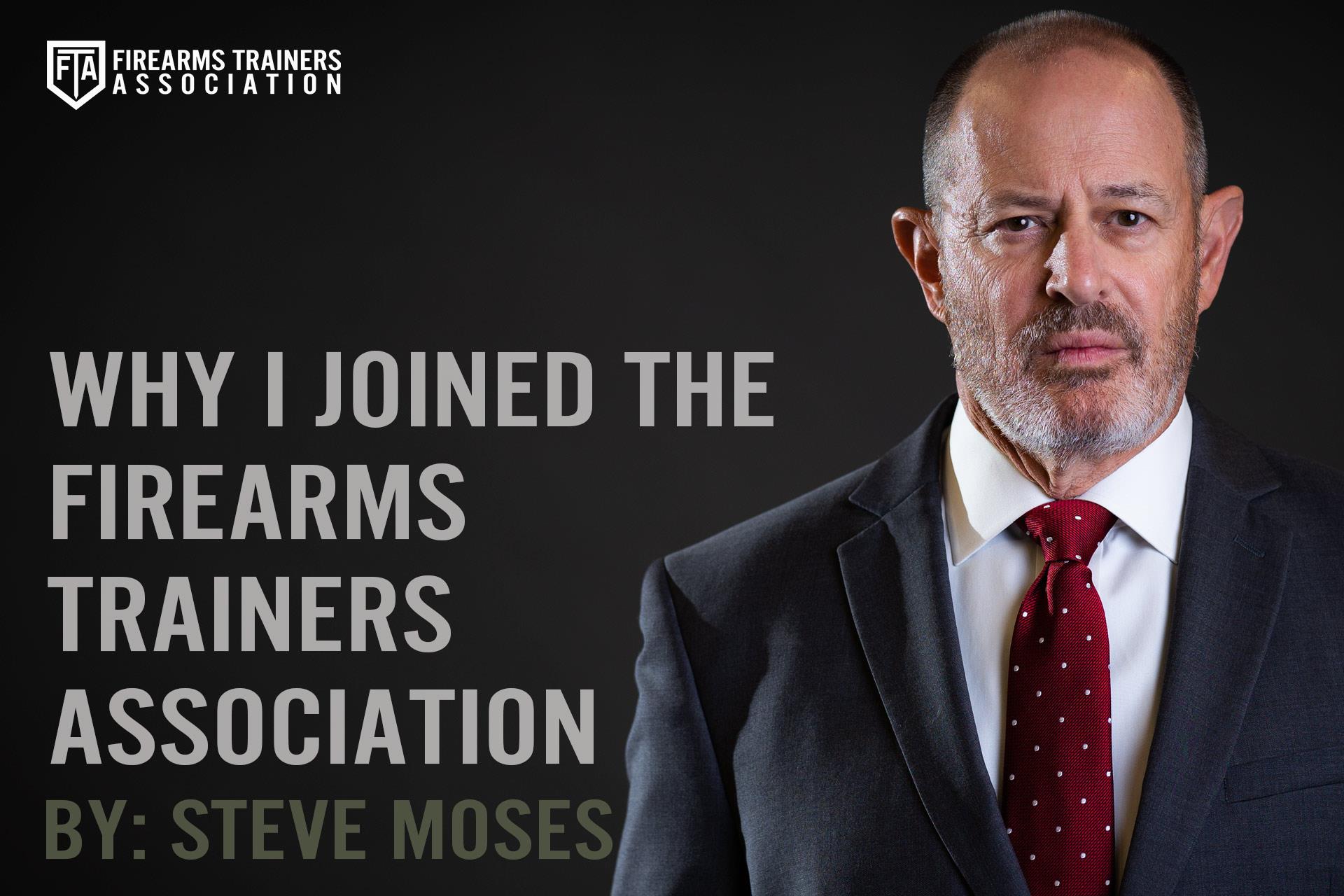 Posted on November 12, 2020 by Steve Moses in Training

Why I Joined The Firearms Trainers Association

WHY I JOINED THE FIREARMS TRAINERS ASSOCIATION

I officially started receiving renumeration for conducting firearms training in 1994. When it comes to being a firearms trainer, I want to be no less than the best possible version of one. At no time have I rested on my laurels, and the defensive firearm class that I teach today is far different and definitely superior to the class that I was teaching 26 years ago.

One of the main reasons that I believe this to be true is the fact that I never stopped being a student myself, and I spend considerable time and money taking classes and attending clinics (well over a hundred in total now), searching for material that could help me be a better instructor, listening intently to the tips, suggestions, and recommendations of other instructors whenever the opportunity is presented, and if necessary contacting one of my mentors and asking direct questions.

There have been occasions where I struggled finding the words that would finally resonate with a student that was unable to correctly perform an action or understand why we did not care for a tactic they saw on a YouTube video. On more than one occasion I was watching the weather forecast two days before a class, knowing that I had students traveling in some instances hundreds of miles in order to attend, and debating whether or not to reschedule the class because of the high probability of freezing rain or damaging thunderstorms. I have traveled to teach classes only to show up and find that the range partially submerged, no target stands, or berms only about six feet tall. I have seen students fall ill and suffer injuries in mine and other classes (thankfully none of them life-threatening).

On a few occasions I have had the following students in one of my classes:

When I heard the announcement of the formation of the Firearms Trainers Association (“FTA”) several years ago I was intrigued. Part of their mission statement was to develop an organization that was designed to legitimize, serve, and develop the profession of firearm trainers without getting mud-sucked into politics. Immediate pluses included videos by Larry Vickers, Ken Hackathorn, Dave Spaulding, and Jeff Gonzales, written safety briefings, Waivers of Liability, and use of the FTA logo. Some of the videos and articles featured trainers offering training tips and addressing difficult situations and scenarios that firearm trainers may encounter in future classes, some of which I had not considered before.  When I teach, I want to be as articulate and effective as possible, and I will gladly use anything and everything of value that I can, whether I learned it first-hand or read it in a FTA article or saw it on a FTA video. I immediately joined (I was hoping to be the first FTA policyholder, but instead had to settle for second).

I have a wife that I love and have sworn to protect as well as a daughter with a beautiful family that means the world to me. I cannot imagine how my life might be affected as well as would theirs if I were bankrupted due to a lawsuit. I had maintained a firearm trainers insurance policy for years in order to help protect what I have in the event an incident occurs in one of my classes. No matter how hard we strive to maintain a safe class, we are not able to control all of the actions of all of our students all of the time. Negligent discharges are possible, and students can fall and break wrists and ankles or blow out knees. A significant benefit of FTA membership is comprehensive liability insurance coverage though the FTA by 2A Insurance Captive. This not only helps me protect what I have worked for but meets the requirements of all the ranges at which I teach. Those of us that are providing firearms training to others are doing so at no little financial risk

Like I stated earlier, I previously had liability insurance through another company, and my experience with them was satisfactory. What pleases me now is that for a similar cost I enjoy the benefits derived from being part of for what all purposes is a world-class firearm trainers guild whose founders include some of the greatest trainers in the industry, all for $400 per year. I was added to the FTA team in October, 2020 and my duties will include generating Certificates of Insurance and Range Endorsements, addressing questions posed by persons interested in joining as well as those received from existing members, and assisting other FTA employees in adding new course materials, marketing and web content,  articles written by talented defensive firearms trainers, and short videos featuring instructors that are well known along with those that are rising stars.

I am currently working with another FTA employee at this time on developing some Train the Trainer classes including an eventual Church Security Instructor class.  At this time, I am fielding calls from trainers interested in joining the FTA and have been asked several times if FTA members have to teach a FTA-approved curriculum. The answer is no, although all classes taught by FTA members must require their students to sign an approved safety waiver (the FTA provides a downloadable safety waiver, which I use) and FTA members are expected to conduct their classes in a manner that is both professional and safe at all times. These are all actions that professional trainers. whether FTA members or not, are already probably doing.

The peace of mind that comes with FTA membership along with multiple resources that can make me a better firearms trainer are significant. I remind myself constantly that I am doing more than providing a service for a fee, I am doing my very best to help prepare another human being avoid being ensnared in a deadly force event and, if that is not possible, to prevail in the fight and possible legal battle afterwards. That is a task not to be taken lightly, and this is where FTA membership can be an enormous asset.