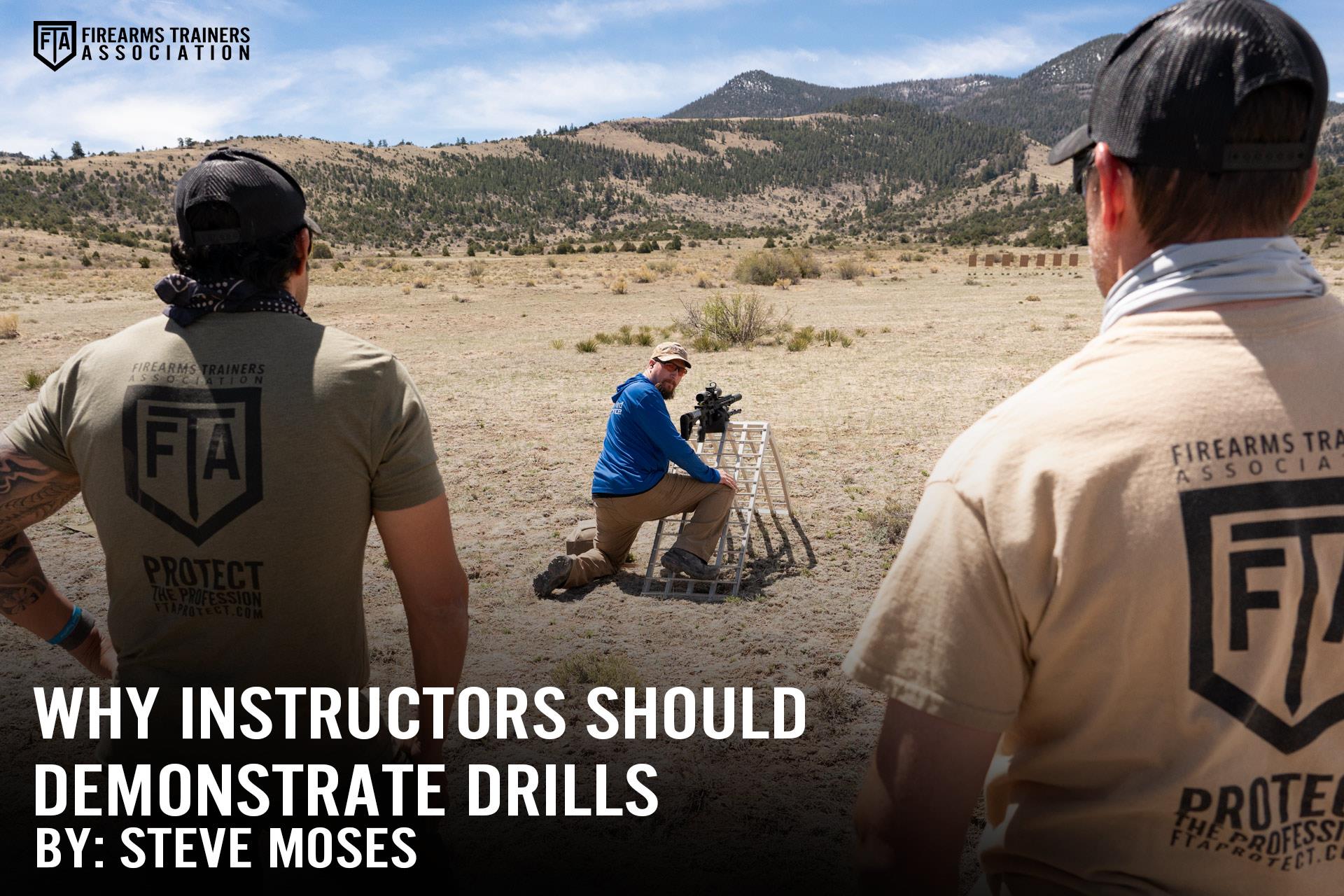 Why Instructors Should Demonstrate Drills

WHY INSTRUCTORS SHOULD DEMONSTRATE DRILL

I have studied under other instructors for 28 years and taken over 100 different defensive weapons and tactics classes.  Some of the classes I have taken have been outstanding, others fair at best.  I distinctly remember the classes in which the instructors failed to demonstrate how to perform a single drill. At the end of some of those classes I remember being disappointed and wondering if the instructor was trying to hide something. As instructors, I think that we should consider the fact that many of our students are likely to share a perspective similar to mine. I am a firm believer that it is important that instructors demonstrate each and every drill, technique, or tactic that they want the student to perform or learn to the extent that they themselves can still physically do so.

Three commonly accepted general learning styles when it comes to adult learning are visual, auditory, and kinesthetic.  In simpler terms, some people learn better by relying primarily on their vision, others more so by careful listening, and some by literally doing or touching what they are learning.  Instructors would be well-advised to target all three learning styles by showing the students what they want them to do, carefully explaining how to go about it, and then having the student physically perform the action to be taken.  One of the better ways to accomplish this is to literally demonstrate the drill, technique, or tactic to be learned (this addresses in part the visual and auditory-preferred styles) followed by then having the student physically do the same action.

Master instructor Tom Givens is literally an instructor’s instructor, and students that have completed his Firearms Instructor Development Course typically find themselves on the fast track to becoming a competent defensive handgun instructor. I am blatantly stealing the following wording from his Student Manual: “Demonstrate. When teaching skills and techniques, instructors must show and demonstrate the skills. Many students need to see the techniques in order to understand what you are saying. You must be skilled in the technique to be demonstrated.”

Set out below are a few things I have picked up over the years:

Performing demonstrations before our students is beneficial to the instructor.  The ability to competently perform on demand before a class of students can be stressful.  I have discovered over the years by doing this repeatedly that a certain level of stress-inoculation has occurred. We should consider this an unexpected benefit.

Perform demonstrations at a reasonable speed given the level of the class. I have done a demonstration of a multiple shot drill before a basic class, and upon its completion turned around and told the class that I shot it faster than I wanted them to, and then shot it again at a more moderate pace. As class progresses, shooting speed is increased until we ideally achieve a good balance of speed and accuracy. Students should be told that if they can’t do something correctly at a slower speed, they certainly can’t do the same thing correctly at a higher speed. If I insist on shooting every drill at high speed just because I can, some may insist on doing the same thing and the hits will suffer.

It seems like there is always at least one student that hasn’t positioned him or herself so that they can actually see what it is being demonstrated, which is especially true on such subtle actions as taking the slack out of the trigger, proper trigger reset, and the finer nuances of gripping the pistol and holstering. It may be necessary to ask them to re-position themselves so they can see what is being demonstrated.

A good sense of humor is a plus.  Most of us will blow a demonstration at some point. If it was a simple drill and I believe that the point of the demonstration was adequately made, I usually say: “Okay, do as I say and not as I do.” If it is a more complex drill and I am concerned that the students didn’t understand what I wanted them to do, I usually say” “Well, that didn’t go so well. I will take one more stab at it, and if that tanks console myself with a beer later.” It helps if instructors stay in their lane and only teach skills in which they are already competent.

Obviously, we can’t expect to perform at the same levels during our entire adult life. Injuries take their toll, vision deteriorates, strength diminishes, stamina decreases, and even medications can cause performance issues.  As long as we can perform at an acceptable standard, we need to accept this and not beat ourselves up. During the last Defensive Carbine class that I taught I discovered during a demonstration of shooting from the Monopod Prone Position (shooting from the prone position using a thirty-round magazine as a form of monopod to increase stability) that the arthritis in my lower neck had progressed to the point that I could barely see through my scope. I stopped shooting, apologized to the students for blowing the demonstration, then had them proceed. The students had seen me demonstrating every drill that I had taught up until then so no damage was done to my credibility (internal damage to my pride was incurred as I realized that this was just one more time that I had lost another step). There are a lot of outstanding older instructors out there with a wealth of knowledge that physically can no longer do everything they once could but can still brilliantly teach and defend themselves quite adequately. It is entirely acceptable in my opinion for an instructor to enlist the assistance from one of his or her senior students to perform the demonstrations if the instructor has been compromised by age, injury, or illness in some way as long as the students respect the instructor.

There are certain small things that can only be taught via direct demonstrations. Surprise, speed, marksmanship, and even violence of action are all critical components of effective self-defense for the majority of self-defense shootings. I simply do not understand how an instructor could adequately teach his or her students the students how to achieve each component without a physical demonstration before the class.